Second Chance Pass by Robyn Carr. # 5 in Virgin River Series. Follows Widowed Vanessa and her late husband's best friend retired marine Paul as they try to sort out their feelings for each other. Plus a new romance between Vanessa's dad and a newcomer to town.

Temptation Ridge by Robyn Carr. # 6 in Virgin River Series. I had originally read a review about Temptation Ridge on My Friend Amy's blog who suggested I begin with book 1. Great idea. Fell in love with the series.
Follows Shelby, Vanessa's cousin and her relationship with newcomer, retired Blackhawk Pilot, Luke. He's very jaded and hates commitment. She's very sweet, but tough.

Cry Mercy by Mariah Stewart (Mercy Street Novel) Introduces Ann Nolan, a beat cop who adopted the daughter of a notorious drug dealer. Now he's found out who has her and wants her back. She flees to across the country, using an assumed name and gets a job as an investigator with the Mercy Street foundation. The foundation is dedicated to searching for missing persons. Their first case involves a missing sorority girl and her legal guardian is bound and determine to help Ann aka Emma find his niece. Lots of danger and mystery in this one. 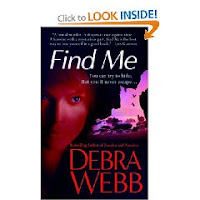 Find Me by Debra Webb. Investigative reporter Sarah Newton travels to Youngstown to find out who really killed a popular teenager and debunk rumors her death was supernatural. Kale Connor, the newest town councilman is suppose to show her around and keep her in line. Lots of small town shenanigans and secrets for them to sort out as she searches for the true killer. Murder mystery with a bit of romance thrown in.

Breakpoint by JoAnn Ross (A High Risk Novel) Romantic suspense novel involving retired combat officer Dallas O'Hallaron and Retired Jag officer Julianne Decatur. They are both recruited by a top secret government group called THOR and assigned to investigate the death of a female navy flyer's suicide. Her death is highly suspicious and Dallas and Julianne find themselves being followed and the death count rising. Everybody has a secret. Murder mystery with a bit of romance thrown in for good measure. 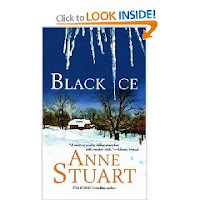 Black Ice by Anne Stuart (book # 1 in the ice series). Chloe Underwood is a book translator and her roommate gives her the opportunity to translate for a business conference at a remote Chateau. She understands more languages than they think and the businessman are illegal arms dealers. Bastien Toussaint, ordered to kill her, decides instead to save her and they are off on the run. He doesn't know who they can trust and now he's put his life on the line for her.
at July 30, 2009