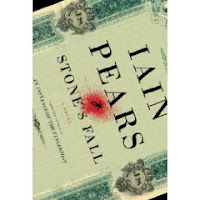 Back cover: "Iain Pears tells the story of John Stone, financier and arms dealer, a man so wealthy that he was able to manipulate markets, industries, and indeed entire countries and continents. A panoramic novel with a riveting mystery at its heart, Stone's Fall is a quest to discover how and why John Stone dies, falling out of a window at his London home. Chronologically it moves backward--from London in 1909, to Paris in 1890, and finally to Venice in 1867--and the quest to uncover the truth plays out against the backdrop of the evolution of high-stakes international finance, Europe's first great age of espionage, and the start of the twentieth century's arms race."

I recently discovered Iain Pears Art History mysteries, so when the opportunity to get an advance reader copy of "Stone's Fall" came up through Shelf Awareness, I didn't hesitate to request it. It is told through the view points of three men, in three different time periods and revolves around John Stone, his widow, Elizabeth Ravenscliff, and a mysterious child mentioned in Stone's Will.

In the year 1909, Matthew Braddock is hired by Elizabeth to find the child. In the course of his search, he meets numerous characters involved in Stone's life. One is Henry Cort. Henry Cort takes over the story in Part two beginning in 1890 and tells how he also became involved in the life of John Stone and Elizabeth. He tell the story of his evolution as a spy and how he played a roll in John Stone's life. He leaves a mysterious package for Braddock to open at a later point. John Stone takes over the story bringing the reader back to 1867 and how he evolved as one of the most richest and powerful men in the world. The story ends with a shocking twist that was totally unexpected.

One particular passage stood out to me when the journalist, Matthew struggled to understand finance. He recruited a friend, a banker who lived for numbers to help his decipher Stone's papers.

"He believed that the rich were better people than the poor, and that to be around them made him better as well. Wealth was both the indication of God's favour, and provided the means to carry out His wishes on earth.

"Harry Franklin, you will understand, had no trouble whatsoever in reconciling God, Darwin, and Mammon; indeed, each depended on the others. The survival of the fittest meant the triumph of the richest, which was part of His plan for mankind. Accumulation was divinely ordained, both a mark of God's favour and a way of earning more benevolence. True, Christ was a carpenter, but, had He been living in the twentieth century, Franklin was sure that the Messiah would have paid good attention to His stock levels, steadily expanded His business into the manufacture of fine furniture, while also investing in the latest methods of mass production by means of a stock market flotation to raise the additional capital. Then He would have brought in a manager to free Himself to go about His ministry."
pg 135

John Stone, himself was an interesting character who can best explain himself

"I was not intended by family, education or natural instinct for a life of, or in, industry. I still know surprisingly little about it, even though my companies own some forty factories across Europe and the Empire. I have little real idea how the best steel is smelted and have no more notion of how a submarine works. My skill lies in comprehending the nature of people and the evolution of money. The dance of capital, the harmony of a balance sheet, and the way these abstractions interact with people, their characters and desire, either as individuals or in a mass. Understand that one is the other, that they are two separate ways of expressing the same thing, and you will understand the whole nature of business." Pg 575

"Stone's Fall is full of intrigue, secrets, behind closed door plotting, murder, manipulation, and deceit. It isn't one of those stories you can read quickly or skim or you will miss a lot of detail. Highly recommended.


Other thoughts about "Stone's Fall"

Jeremy of PhiloBiblos:
"Not to put too fine a point on it, this is a masterwork by one of the most ingenious and versatile writers of our time."

J.M Cornwell on Celebrity Cafe:
"In today’s world where high finance and the industrialization of capitalism are crumbling all around us, Iain Pears’s novel, Stone’s Fall, is a revelation with chilling implications. More so, it is an engrossing and mind-bending story that moves backward and forward through time with ease and familiarity. "

Robert Weibezahl of Bookpage Fiction:
"From the first page of Stone's Fall, the reader is immersed in a remarkably well-plotted story, rich in detail, elegantly told."
at May 08, 2009