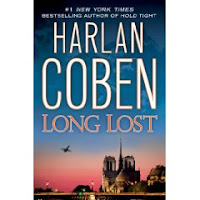 
Front Flap: "Myron Bolitar hasn't heard from Terese Collins since their torrid affair ended ten years ago, so her desperate phone call from Paris catches him completely off guard. In a shattering admission, Terese reveals the tragic story behind her disappearance--her struggles to get pregnant, the greatest moment of her life when her baby was born...and the fatal accident that robbed her of it all: her marriage, her happiness, and her beloved only daughter.

Now a suspect in the murder of her ex-husband in Paris, Terese has nowhere else to turn for help. Myron heeds the call. But then a startling piece of evidence turns the entire case upside down, laying bare Terese's long buried family secrets...and the very real possibility that her daughter may still be alive.

In grave danger from unknown assailants in a country where nothing is as it seems, Myron and Terese race to stay a step ahead of Homeland Security, Interpol, and Mossad. Soon they are working at breakneck pace not only to learn what really happened to Terese's long lost little girl..but to uncover a sinister plot with shocking global implications."

I have fallen in like with another new to me author. I received an Advance Reader Copy of "Long Lost" by Harlan Coben through Shelf Awareness courtesy of Dutton Marketing. "Long Lost" is an excellent story, very well written and entertaining.

Myron, the main character, has a quirky sense of humor and the story is written from his perspective. I generally don't care too much for stories written in first person point of view because I find them hard to get into, unless they are very well written. This one is and captured my attention. It is truly a mystery, full of suspense with many surprising twists and turns. This is the 9th book in the Myron Bolitar series. Now that I've been introduced to Myron, will have to go back to the beginning and read "Deal Breaker."

Myron is surprised to hear from Terese whom he hadn't heard from in 10 years. She needs his help and he is willing to drop everything (especially since his girlfriend dumped him) and fly to Paris. They once had a torrid affair and he has only seen her once since then, when she dropped everything to help him. Now she needs his help. Her ex husband is missing and found dead and she's a suspect. Myron finds himself thrust into the center of a mystery as he is detained by the french police, followed, shot at, and threatened. Both his and Terese lives are put in danger as they uncover secret after secret. I can't say anymore about it without giving away any spoilers. All I can say is that Harlan Coben has earned a new fan.


Links to other reviews

Jeff Baker of The Oregonian
"Take a reluctant gumshoe with other interests and deadly skills, an innocent placed in harm's headlights, a dash of romance put on pause pending inevitable heroics, and immerse it all in first-person, dialogue-saturated narrative dripping with enough cynical, self-deprecating sarcasm to make Dashiell Hammett wonder where his genre went, and you have the stuff that keeps Nelson DeMille, Robert Parker and Stuart Woods in their recession-proof German cars."


Mystery Book Review
"Readers will be sorely tempted to finish Long Lost in one setting. The narrative is taut, the pace relentless."