This has been a fun week. Besides normal lessons, we've been working on Cub Scout stuff and Friday was the monthly pack meeting. This month's pack meeting was all about inspections. 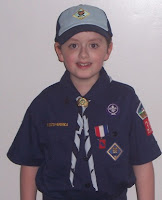 Does he look ready for inspection? James' den was also supposed to be responsible for the invocation. However, neither Den mother was there because one was out of town and the other one sick. So they just skipped the invocation and Father and another parent stepped in to do the inspections.

In the past couple weeks, two new kids have joined James Den and didn't have uniforms yet. A blamed his dad for losing his hat, so he was wearing a bright yellow one that skated pass inspection since it was a cub scout hat of some sort. James skated by not having blue socks - something a mother can easily overlook since you can't see their socks. Instead of the the kids doing skits, the parents were enlisted to perform silly jokes in the midst of the cub master trying to talk. Father and I were volunteered. Our skit - I ran into the middle of the circle yelling:

"What's on you?" Father asks

Exit stage right to laughter and groans. Yes, the rest were equally silly. But a good time was had by all with much laughter, singing, yelling and the general mayhem you get with an auditorium full of boys.

Explorer Bible Study: Lesson 6 covered Genesis 5 - 6 Increase of Wickedness. God's decision to flood the earth because of the wickedness of man and his covenant with Noah.

His sentences: The Goomba chased Mario clumsily across the planetoid. He also drew an interesting picture of Mario being chased. The Goomba charged forward and the Mandibug charged inside.

His mind is still on completing Mario Super Galaxy and he has one power star left to get. He saved the hardest one for last, unfortunately - Luigi's purple coins in which he has three minutes to race around on crazy rocking squares and pick up 100 coins, then get back to the start point. He hasn't been able to do it, so what does he do. He started a new game and has been zooming through it all week, practicing going really fast and managed to get 113 power stars, including completing Luigi's purple coins. We are trying to talk him into going back into the old game and completing the last challenge. But he wants to finish the 2nd one, then go back to it. He's just stubborn that way.

The Owl and the pussy cat decided to get married. They got a nose ring from a pig and got married. 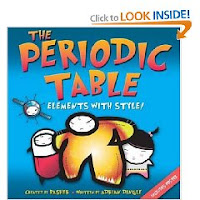 Fun little book with each element, explaining what they are and what they do. They also read about Oxidation and Reduction in DK Chemistry book and in DK Eyewitness "Great Scientists" read about Alan Turing. Turing developed The Bombe which cracked the German Enigma code and also help create the design for the Automated Computer Engine.

History: Read Chapter 16 How Pocahantas took a journey over the Seas in This Country of Ours. When the english heard about Pocahantas's father, Powhatan, they had no idea he wasn't a real king. Because he was leader of the indians, they considered him a king and thus Pocahantas was a princess. The english treated her like royalty.