Perseverance pays off - He Did It! 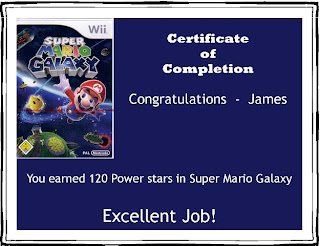 For the past month James has been diligently playing his Super Mario Galaxy Wii Game and earning 3 or 4 power stars a day. The game isn't easy especially with having to play the game two handed with the wii remote and the nunchuk remote. He earned 119 power stars and got really stuck with the hardest challenge of all. Luigi's purple coin which he had to get 100 coins in 3 minutes and back to the start. He tried and tried, but just couldn't do it. So what did he do? He started a new game and went as fast as he could through the challenges.

In one week he earned 112 power stars. Then, he decided to go for the purple coin challenge and did it. At first, he said he was just going to finish the current game and not go back to the original game waiting for him with 119 power stars. Finally, Father talked him into it and he tried. He did it! 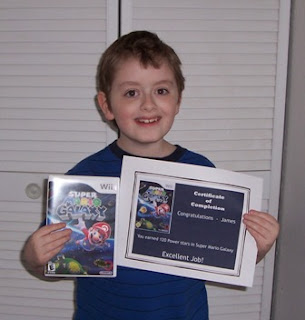 Look at that happy face!
He is so happy and we are thrilled he has finally mastered the game. But did the game end there? Nope. Once he earned the 120 power stars, it unlocked brother Luigi. Now he gets to play the game again as Luigi who happens to move much faster than brother Mario did. James is already gotten 67 power stars and still going strong. I'd say we are getting our monies worth with this game.
at March 25, 2009