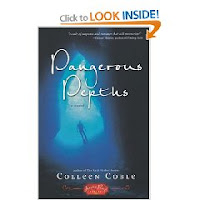 
Back Cover: "Leia Kahale ditched a promising medical career to settle on a secluded island of Hawaii. She ditched Bane Oanu, too, and he's come to the island to find out why. He's also in search of an archaeological fortune rumored to lie offshore. But an act of sabotage that pushes Bane closer to Leia plunges them both into a tangle of emotion--just as a series of threatening events grip the island. Theft, a friend's death, a bizarre intruder, hints of a second treasure... and even murder--how can they sort it all out when everyone on the island has something to hide?"

Dangerous Depths is book three in the Aloha Reef series and is a good story. Leia has returned to the islands to practice holistic medicine, which doesn't please her mother at all. She used to be engaged to Bane but broke it off and he has returned to the Island, not only to win her back but to search for a spanish galleon that sank in the waters off shore. They have to deal with the death of a friend, her grandmother's Hansen's disease (more commonly known as leprosy), and watch over her sister who has down's syndrome and is a little too trusting of strangers. In the midst of it all Leia battles her attraction for Bane. The story is full of twists and turns and who is after who.

Dangerous Depths is the last book in my TBR pile by Coble. I've been debating back and forth with myself as to why I didn't like this series. The history behind my reading the series was I picked up Fire Dancer at Berean's. Right after that I was looking for a particular book on Christianbooks.com and the 3 books were on sale, so I bought them. Without have first read Fire Dancer.

The writing is good, but I had a problem with each and every one of the characters. They just seemed weak and too many things happened that they didn't follow through on until later. The characters didn't seem to react like people should to things happening around them. Something was missing and I just couldn't put my finger on it. I kept telling myself that I wanted to like the series because they are written by a christian author and I didn't want to persuade others not to read the series. Every single review out there was that the books were excellent. So you will have to judge for yourself. They just weren't my cup of tea.
at March 15, 2009