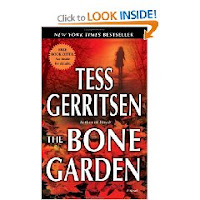 "Present Day: Julia Hamill makes a horrifying discovery on the grounds of her new home in rural Massachusetts: a skull buried in the rocky soil--human, female, and according to the trained eye of Boston medical examiner Maura Isles, scarred with the unmistakable marks of murder long ago...


Boston, 1830: To pay for his education, medical student Norris Marshall has joined the ranks of the local 'resurrectionists'--those who plunder graveyards and harvest the dead for sale on the black market. Norris now finds himself the prime suspect in a series of grisly murders. Joined by a sardonic young man named Oliver Wendell Holmes, Norris sets out to prove his innocence and track down a maniacal fiend--part of the dark mystery reaching across centuries to the present-day world of Julia Hamill."

The Bone Garden is a very suspense filled murder mystery that mixes the present with the past. In the present, Julie discovers the bones of a murdered woman in her backyard and traces her history to the past owner of the house. He has boxes and boxes of documents of his ancestors belongings and he and Julie begin to sift through trying to find the answers to who the woman was.

In the past - is the beginning of the story involving Rose, a poor Irish worker and and Norris, a medical student at the hospital where Rose's sister dies in childbirth. In order for Norris to afford his schooling,he has taken a job robbing graveyards of fresh corpses which are sold to the schools for students to disect and learn anatomy. There is also the mystery of the West End Reaper who is brutally killing people close to Rose. Plus someone wants the baby and will stop at nothing to get her.

The story is very intense and bounces back and forth between the past and present, but it is well done without being confusing. The writing is rather graphic in describing the anatomy classes and dissection scenes - not for the squeamish.

You can find out more about Tess Gerritsen on her website, plus she posts weekly at Murderati, a group blog of murder mystery writers who talk about what else but murder, mysteries and marketing.