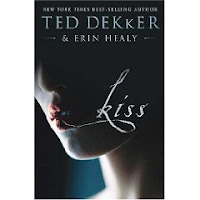 Back Cover: "Let me tell you all I know for use. My name. Shauna. I woke up in a hospital bed missing six months of my memory. In the room was my loving boyfriend--how could I have forgotten him?--my uncle and my abusive stepmother. Everyone blames me for the tragic car accident that left me near death and my dear brother brain damaged. but what they say can't be true -- can it? I believe the medicine is doing strange things to my memory. I'm unsure who I can trust and who I should run from. And I'm starting to remember things I've never known. Things not about me. I think I'm going crazy. And even worse, I think they want to kill me. But who? and for What? Is dying for the truth really better than living with a lie?"
Kiss really packs a punch from the very beginning. Shauna is very angry with her father, has found out some incriminating information and is going to confront him about it. As always, they get in an argument and she leaves angry. However, she wakes up 6 weeks later from a coma. She learns she had been in a car accident which left her with amnesia and her brother crippled for life. Her father and stepmother blame her entirely for the accident because they found drugs in her system, in the car and in her apartment. But she thinks that can't be right - she's never taken drugs. The only person she can trust is her boyfriend - whom she doesn't even remember.

She decides to investigate the accident and try to recover her memories. But in the process she discovers something strange happening. She is having strange memories, not her own. She dreams of being a football player and being injured badly. Come to find out her boyfriend suffered a spinal injury while playing football. She dreams of being a soldier in war and discovers her boyfriend was in the war. Whenever she kisses her boyfriend, she ends up with one of his memories. And he losses his memory of the event. How is this happening? Is she somehow stealing memories.

In the process of trying to discover what really happened the night of the accident, Shauna uses her ability to steal memories and ends up not knowing who to trust. Kiss is full of twist and turns and you're never quite sure who is the good guy and who is the bad guy. The story is a page turner and once you start reading, will keep right on until the very end. This is the first time collaboration for Ted Dekker and new author Erin Healy and it is very well done.