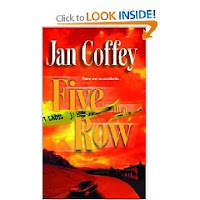 Five in a Row


Back Cover: "A Porsche careens out of control in a crowded parking lot. A brand-new SUV smashes through a dealership's plate-glass window. A Mercedes races wildly down a pier before diving off the end onto the deck of a yacht. Then two more wrecks. Witnesses report the vehicles had 'a mind of their own' before each accident. Five in a row can't be a coincidence. Computer guru Emily Doyle has become the single-minded focus of a hacker determined to capture her attention. She recognizes the technology that is being used to gain control of the vehicles--and in some way, she is connected to each of the victims. Ben Colter is the investigator called in by the automakers to find the link. As the casualties mount, Emily and Ben must unravel the puzzle of the seemingly random attacks, as a twisted mind moves from virtual reality to international terrorism."

Five in a row is a romantic suspense thriller. Emily has a secret admirer and he has become obsessed with her. He has developed a way to take control of new cars and make them crash. He is singlemindely trying to remove the people involved in Emily's life - whether from the computer course she teaches on line to her son, whom he thinks stands in his way. He stalks her - watching her both cyblerly and physically. He is biding his time - then she will be his. Ben Colter has admired Emily's computer expertise for years and has tried to hire her many times. He arrives in town as the lead investigator for the automakers and enlists Emily's help. Together they discover, all the accidents lead to her and they try to find the stalker before he kills the one thing in Emily's life she is most passionate about - her son. When the stalker's attention turns to her son, Emily turns into one mad mama bear. Along the way, Emily and Ben are attracted to each other and fall in love.

I finished Five in a Row last night. Very well done with wonderful writing and an interesting storyline with 3d characters. Can you tell I liked it. This is a first time read by anything written by Jan Coffey. Jan Coffey is a pseudonym for the husband and wife writing team Jim and Nikoo McGoldrick. You wouldn't know there are two people who wrote this story. There have been times I've read a book and could tell different people were involved in writing the story. Five in a Row had one distinct voice and stuck with it throughout the story. Highly recommended and I will definitely be reading more stories by the writing duo of Jan Coffey.