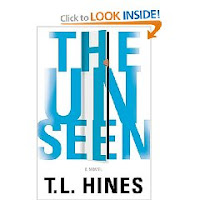 Back cover: "Lucas is a loner, but he’s never alone. From secret hiding places, he peers into the lives of others—watching them while they work, while they commute, while they sip their morning coffee. He is the master at remaining silent and unseen in his carefully constructed world as an invisible observer. But when a chance encounter turns the tables, the watcher becomes the watched. Caught up in an escalating series of events he is powerless to stop, Lucas discovers an underground organization with a chilling mission. Anyone can be watched. No one is safe. And the most terrifying secrets of all remain unseen. Until now."
The Unseen is about a man who likes to watch others invisibly from hidden caches in offices, elevators and closets. He like to watch people and make up imaginary stories about what he thinks their lives are like. He lives where ever he likes in abandoned steam tunnels, or vacant offices in office buildings. He eats left over or abandoned lunches from break room refrigerators and wears clothes from goodwill. He doesn't pay rent, buy food or clothing. He has managed to save several thousand dollars working under the table jobs for cash. He lives under the radar, unnoticed and unseen.
Until one day he runs into a ‘creeper’. Someone who likes to explore tunnels and authorized employee only areas, take pictures and leave their mark proving they were there. Douglas is part of the Creep Club, a group who like Lucas, like to watch. However, Lucas only watches people in public places. These people enter into private homes, film the activities of their lives and share the films with the club. Douglas invites Lucas to a meeting and he is turned off by their voyeuristic attitudes especially when they do nothing to help the people they watch. Two of the videos reveal a man whom his wife and partner want to kill off, another a woman who is being abused by her husband.
Lucas decides to be a good Samaritan and try the help the people in the videos, but once he does his life is no longer his own. Now someone is watching him and he’s drawn into a world of murder, dark plots and secrets. I can’t say more without giving away spoilers, but suffice it to say, with all the twists and turns, the story and characters will keep you fascinated to the very end. I thoroughly enjoyed this ‘noir bizarre’ story by T.L. Hines.