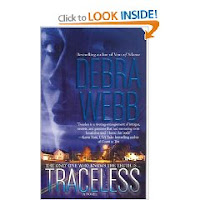 Back Cover: She's in Search of Justice. Emily Wallace has no doubt about who killed her best friend ten years ago: Clint Austin, the town bad boy. The key witness in his trail, Emily put Clint behind bars with her tearful testimony. But when Emily learns that Clint has been released on parole, she returns to her Alabama hometown to confront him--and make sure he never forgets the damage he has done.

He is dead-set on revenge. After serving ten years for a crime he didn't commit, Clint knows only the truth can set him free. Ignoring warnings from his old friend, now the chief of police, Clint will let no one stand in his way as he tries to prove his innocence--including Emily, the girl he once loved. Prison has made him a hard man, yet he yearns from Emily...and he can see in her eyes that, in spite of herself, she feels the same. But even if he can convince her to trust him, it might be too late to clear his name--before the real killer strikes again."
Traceless is a first time read of anything by this author for me. While the writing is excellent, the main characters grated on my nerves. Both Emily and Clint are emotionally driven in everything they did and I would have to say it was also an age related thing. Both characters are in their twenties and stunted by the actions that happened ten years prior. The story was interesting enough to make me want to finish it and I ended up skimming through a lot of it, just to find out who is the real killer. It will surprise you.

Traceless is full of small town politics and justice, cover ups and soap opera drama of whose sleeping with who. The love scenes between Emily and Clint were just strange considering the drama that drives these two together. I really can't say the story was bad with all its twists and turns. Just that the twenty something, still stuck on high school happenings drama isn't for me.

I'll have to try another one of Webb's books because I did like her writing style. Faceless looks good so putting it on my amazon wishlist for when I've whittled down my TBR pile a bit.