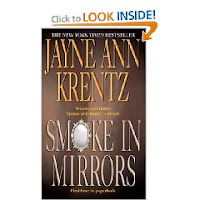 Just finished two interesting books by Jayne Ann Krentz which are as different as night and day.


Smoke and Mirrors is a romantic suspense novel


Front Flap: "A con artist and seductress, Meredith Spooner lived fast and died young. But her final scam--embezzling more than a million dollars from a college endowment fund--is coming back to haunt Leonora Hutton. The tainted money is stashed away in an offshore account for Leonora. And while she wants nothing to do with the cash, she discover two other items in the safe deposit box: a book about Mirror House--the place were Meredith engineered her final deception--and a set of newpaper storeis about an unsolved murder that occured there thirty years ago. Now Leonara has an offer for Thomas Walker, another victim of Meredith's scams and seductions. She'll hand over the money--if he helps her figure out what's going on. Meredith had described Thomas as "a man you can trust." But in a fun house mirror world of illusion and distortion Leonara may be out of her league." 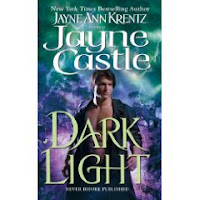 Dark Light written under her pseudonym Jayne Castle
which is book 5 in her Ghost Hunter series. I'm not quit sure why I jumped in at this point, but will certainly go back and read the rest of the series. The story is a futuristic, paranormal romance and quite interesting.


Back cover: "Everything is different underground. Just ask the residents of Harmony, a futuristic world where alien catacombs can lead you astray--and where psychic senses spark out of this world passion. Reporter Sierra McIntyre's stories on Crystal City's ghost hunters--and their mysterious guild--have earned her tabloid a bit of respect. And they've allowed her to clothe her dust bunny companion Elvis, in rock and roll style. It helps that she has mega rez intuition to fall back on. Especially when she interviews Ghost Hunter Guild boss John Fontana about the disappearances of retired, homeless hunters. She doesn't want to trust the physically and psychically powerful man. But her senses--and Elvis--give her the green light. To uncover the conspiracy within his own organization, Fontana proposes... marriage. And though it's purely a business arrangement, there nothing pure about the attraction that sizzles between them."

Both books are very well done and enjoyable reads. They are both very different stories with interesting characters. Whereas Smoke in Mirrors is a suspenseful romance set in a small foggy town called Wing Cove bordering Puget Sound, Dark Light is set on another planet called Harmony. Krentz has done a good job of creating characters with distinct voices in each story.
at December 25, 2008