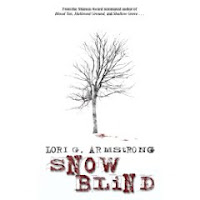 
Back Cover Excerpt: The frigid Winter months are mighty slow in the PI biz for Julie Collins and her partner, Kevin Wells--until the duo is hired by a young woman to investigate problems at her grandfather's assisted living facility, where they encounter lax security, unqualified healthcare personnel, and a shady senior volunteer organization.

Julie barely has time to delve deeper into the puzzling case before she reluctantly finds herself in an isolated cattle shelter on the Collins ranch with her father during a raging blizzard. There is no escape from her father or from the biting cold and bitter memories.

A missing hired ranch hand found dead on the ranch only complicates matters further. In trying to uncover the truth about the man's death, Julie is forced to wrestle with issues that make her question old wounds and new family loyalties.

Kevin's reckless involvement with their new client tests the bounds of professionalism, and Julie's relationship with Tony Martinez is strained, as he deals with power struggles within the Hombres organization, putting them both in jeopardy.

When the bodies and the snow piles up, Julie seems at odds with everyone, leaving her to wonder if she's being blinded to the cold, hard truths in her life by love...or by hate.

Snow Blind is the 4th Julie Collins mystery and she is busy trying to sort life out, while trying to keep from freezing during the cold South Dakota Winter. You never know what Julie Collins is going to step into when she walks out the door. She smokes, drinks, swears a lot and gets into bar fights. She is one tough lady, or appears to be.

She and Martinez seem to be fighting all the time, he keeps having her followed and won't tell her why. Is she in danger? Tony isn't talking. Plus she is being drawn into the Hombre's business and Tony doesn't like it. Julie and Kevin are hired to find out if a client's grandfather is being neglected in the nursing home. While trying to solve that mystery, another mystery occurs when a body is found on her father's ranch. Did he do it or did some other person just drop the body off in a random place. Julie's relationship with Brittney, her step sister, is tested and found wanting throughout the ordeal. Is Brittney really want a relationship with Julie or is she just like her father.

I highly recommend any book by Lori Armstrong. She blogs over at First Offenders along with Jeff Shelby, Bryon Quertermous, Alison Gaylin and Karen Olson. A witty and engaging group of authors.

Available at Amazon.com and other fine stores.
at November 03, 2008