It's raining, it's pouring, the old man is snoring! Our first rain of the year started last night. Yep, during halloween trick or treating. Fortunately, we had already hit most of the houses and heading for home, when it started to rain. 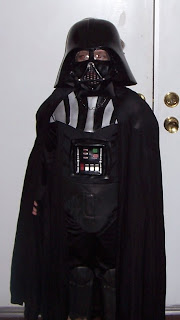 The humidity in the air kept causing the eye pieces in his helmet to fog up. James didn't say a word. Just held on to my hand and kept walking. I looked down at one point and see this. Silly kid. Made him remove the helmet while in motion, until getting to door of a house. One of my neighbors told him he had to say more than "trick or treat" to be convincing as Darth Vader. So, at every house, he said

"Trick or Treat. Where are the plans to my Death Star?" in a deep voice. He also had a portable little breathing machine for authenticity. Everyone thought he was adorable. We were out about 45 minutes before returning home. We got about 4 kids at our door after that. I have so much candy left over that going to take it to the office and put it on the counter for customers.

After all the work I went to carving pumpkins and hardly anyone got to see them. I got creative this year with one. Glad I only did two of the four. My pour aching arm. 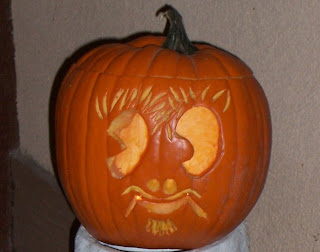 I've completed 1953 words today, so far for nanowrimo. Fortunately, father is at work today which is one less distraction. Of course, I've had to contend with the distraction of 4 cats who can't decide whether they want to be inside or outside, while its raining, plus James wanting to discuss every aspect of his lego batman game as he plays it. But, I persevered while contending with whiny cats who want the door to remain open so they can come and go as they please. Contend with stopping to clean said cats muddy paws evertime they reentered. Contend with making sure James gets the proper accolades for completing a level.

Plus, my inner editor is yelling at me. No, go back. Say it another way. Does that sound right? So I am, figuratively, shoving it into a tiny little box where it will reside for the remainder of the month. My motto is "just write, get it out, get it on paper and fix it later." I think it is working! I can do this!

Don't tell me the moon is shining; show me the glint of light on broken glass. ~Anton Chekhov