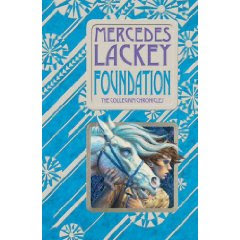 Foundation is the newest novel by Mercedes Lackey in the Valdemar Series.


Amazon: A thirteen year- old orphan named Magpie escapes a life of slavery in the gem mines when he is chosen by one of the magical Companion horses of Valdemar to be trained as a Herald. Thrust into the center of a legend in the making, Magpie discovers talents he never knew he had—and witnesses the founding of the great Heralds’ Collegium.


Back Flap: Mags knew nothing of the world beyond the mine, and was unaware of how unusual his paltry existence was. Then some strangers on huge white horses forced their way past the Pieters family and carried him away to Haven to become a Herald Trainee. Suddenly the whole world opened up for Mags. He was warm and well fed for the first time in his life, and he had Dallen, his companion, who seemed more miraculous than an angel. But the world of the Collegium was not all heavenly. There was political upheavel in Valdemar's capital, for the ancient way of trianing Heralds - the system of one-on-one mentoring that had been successful for centuries--was failing. Many veteran Heralds had died in the wars, and there were too many Trainees to go around. A Herald's Collegium was being built, and many thought it was wrong to train Heralds, in classrooms the same way the Bardic and Healer Trainees were schooled. But dissent among the Heralds was not the only discord in Haven, for the court had been infiltrated by foreign 'diplomats,' who seemed to be more interested in seeding disontent than in actual diplomacy...and Mags seemed to be the only one who'd noticed...."


The first book I ever read of Mercedes Lackey was Arrow of the Queen published in 1987. I fell in love with the characters, the writing and the fictional world of the heralds of Valdemar. In Lackey's latest novel, Mag has been slaving in the gem mines for as long as he can remember. It is a life of toil, drudgery and misery. Dallen decides to choose him and rescues him. For the first time in his life, someone cares about him. Dallen teaches him all about Valdemar and what it means to be a herald. The story is well done and enjoyable.