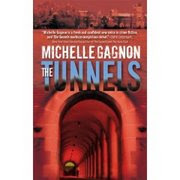 
I just finished "The Tunnels" and it is one scary, creepy, good thriller! The Tunnels is the first of two novels written by Michelle Gagnon. I happened to have picked up the 2nd book "The Boneyard" first and it was excellent.

The books feature FBI special agent Kelly Jones (also the main character in Boneyard) who is investigating the murder of two female students at a prominent New England College. Beneath the college run an old tunnel system dating back to the 1800's. The girls were killed in ritualistic fashion and it is a race against the clock for Jones and her partner to find the serial killer as the body count rises.

"An old, abandoned tunnel system beneath a prestigious New England college becomes the gruesome stalking grounds of a serial killer...

The crime scenes are grim and otherworldy. The bodies of two female students are found mutilated and oddly positioned in the dark labyrinth beneath the school--haunting symbols painted on the walls behind them.

In her decade tracking serial killers, FBI special agent Kelly Jones has witnessed terrible offenses against humanity. Yet the tragedy unfolding at her alma mater chills her to the bone. Evidence suggests there is a connection between the victims--all daughters of powerful men. And elements of the killings point to a dark ancient ritual. As the body count rises, so do the stakes. The killer is taunting Kelly, daring her to follow him down a dangerouse path from which only one can emerge."


This is a chilling, scary story, but very entertaining. One that will keep you reading long into the night. It kept me enthralled way past my bedtime.