The Cozy Mystery Challenge for September is over as of Tuesday. Wow, the month went fast. I kept the challenge easy and read 3 books for the Challenge: Through the Grinder by Cleo Coyle; Murder Uncorked by Michelle Scott; and Murder is Binding by Lorna Barrett. (the links lead to my reviews)

I enjoyed Cleo Coyle's Coffee House Mysteries so much, read the next two -# 3 Latte Troubles and # 4 Murder Most Frosty. There are 3 more in the series including Decaffeinated Corpse, French Pressed and a new one being released on the 30th - Espresso Shot. Those are all going on the wishlist for later. I have to finish the Fall Reading Challenge first. I plan on reading her HAUNTED BOOKSHOP series, which is under her pseudonym Alice Kimberly, when done with the COFFEE HOUSE MYSTERIES. So a big thumbs up to Cleo Coyle.

Murder Uncorked by Michelle Scott was okay. I didn't enjoy it as much as the Coffee House Mysteries but the story was interesting and I love wine. It is the first novel in the WINE LOVERS MYSTERY series and Michelle's first published novel. So, giving her a second read and putting the two other books: Murder by the Glass and Silenced by Syrah on my wish list for later. 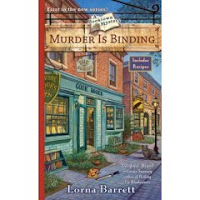 Big thumbs up - thoroughly enjoyed it since I do aspire to have my own bookshop someday. The second story in the Booktown Mystery Series is coming out February 3, 2009 - Bookmarked for Death. I look forward to reading it. Lorna also writes under the pseudonyms of L.L. Bartlett (Jeff Resnick Series). The reviews on Murder is Binding have all been positive and I can only add to the glow.

From the back flap

"Stoneham, New Hampshire was a dying town until community leaders invited booksellers to open up shop. Now its streets are line with bookstores--and paved with murder... When she moved to Stoneham, city slicker Tricia Miles was met with friendly faces. And when she opened her mystery bookstore, she was met with friendly competition. But when she finds Doris Gleason dead in her own cookbook store, killed with a kitchen knife, the atmosphere seems more cutthroat than cordial. Someone wanted to get their hands on the rare cookbook that Doris had recently purchased--and the locals think that someone is Tricia. To clear her name, Tricia will have to take a page out of one of her own mysteries--and hunt down someone who isn't killing by the book...."

Tricia does exactly that. Using the knowledge she has garnered from her mystery books, a little help from her sister, Angelica (an aspiring chef) and some boldness, she sets out to clear her name and find the murderer. There are some twists and turns and you won't know who done it.... til the end! "Murder is Binding" is a fun, easy read. Also included at the end of the book are some of Angelica's delicious recipes such as Lobster Bisque and Crab Puffs.

Eat, drink and be merry!