Okay, I'll admit it. I'm an addict - a book addict. Being a fast reader, I probably read at least 4 books a week. Ever since the used book store opened up in the same shopping center as our business, the addiction has been growing. It all started with nanowrimo actually. I was trying my hand at writing a novel and started reading all kinds of romance novels. My first discovery was Nora Roberts and I read all of hers. Then it progressed to Elizabeth Lowell and Linda Howard and Karen Rose and on from there. I have discovered an amazing number of excellent and not so excellent writers of romantic thrillers and suspense novels.

Yesterday was a work day and while I was at Save-mart doing a commercial bank deposit (Yes - b of a has a branch in save-mart which is so wonderful because it saves me standing for hours in line at the regular bank) I needed to pick up a few things and of course, had to browse through the book section. I actually found a new one by Elizabeth Lowell under her other pen name of Ann Maxwell "Shadow and Silk." 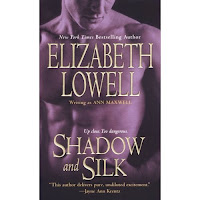 Yikes! What a cover! I'm finding many interesting suspense thriller pseudo romance novels with this type of cover. You can just imagine the questions I get from my hubby and son when they happen to get a glimpse of them.

James: Mom, why is that guy's chest showing? or "Mom, what is that guy doing???? 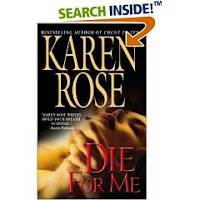 The cover grabbed James attention quickly which lead to a description of the story about a murderer staging cut scenes for violent video games by really murdering people and putting those scenes into the games. Which lead into a discussion about cut scenes in his PC video games, (all g rated of course) photography, violence in video games and why we won't let him have a game system, etc.

My guys are quite inquisitive and the most inconsequential cover can lead to an hour long discussion. Does someone make book covers for paperbacks???? (Hee Hee)

Anyway, I also picked up Crossfire by Joann Ross and Servant: the Acceptance by L.L. Foster (aka Lori Foster) which looks pretty interesting. Only I discovered both are 2nd's in a trilogy, so will save those for a later time after I have picked up the first books. I hate starting trilogies in the middle, even if they say the story stands alone. Often times, I end up going back and reading the whole trilogy over again. I did that with several of Nora Robert's trilogies.

Then, later on in the afternoon when I needed a break at work, where did I go. Yep, to my favorite used bookstore Book Lovers Cafe. Brad took over the store last year and has turned the store into a high quality used bookstore. Book Lovers is a favorite of author, Brenda Novak (a sacramento resident). In fact, I just finished "Dead Silence" which left me wanting more, so will be picking up the other two books in the trilogy soon.

This time however, I had done my research on Amazon and decided before hand what books I wanted to get. I usually find what I'm looking for at Book Lovers 90% of the time. I picked up two more of Linda Howard's books: All the Queens Men and Now You See Her; Jayne Ann Krentz - White Lies, Dane Jordan - No One Left to Tell and Cait London - Flashback. Also picked up the dead trilogy by Mariah Stewart of Dead Certain and Dead Even. But wouldn't you know it, I forgot the 1st book in the series Dead Wrong. It was there, I just forgot to put it in my stack. "Sweetie" the store cat distracted me wanting loves - she is precious). The great part is with the book credit I have on file there, I only spent $14.00.


The hard part was actually bagging up some books to take in. I hate parting with books and my bookshelves are overflowing. Last night, Father and I were watching Sienfield - "the ex girlfriend episode." George had left some books over at an old girlfriend's house and wanted Sienfield to go get them. Sienfield says:

"What is this obsession people have with books? They put them in their houses like they're trophies. What do you need it for after you read it?"