Happy 49th Birthday to Father
Today we celebrated Father's 49th Birthday. I cooked a roast beef with yorkshire pudding. Father usually makes the yorkshire pudding whenever we have roast but I wanted to make it myself this time. I found the recipe in my William Sonoma Roasting cook book - part of the collections series Father gave me several years ago. Right after I put the beast in the oven, I premade the pudding batter and put it into the refrigerator as per instructions. Father has always made a big production of making the batter right before he cooks it and makes a big mess. The only way to cook right! Make a big mess in the process.

Sh - don't let him hear me say that or he won't cook for me anymore. I won't complain - I won't complain. Anyhow I premade the batter. All I had to do when the roast was done was remove the roast from the pan and put it aside, covered of course, to let it rest. Then pour the batter into the nice hot pan with all the beef juice, turn up the heat to 450 and let it cook for 20 minutes. Both roast and yorkshire turned out delicious.

Father received several books from James and I

He really enjoys nonfiction books, especially about war, scientific theory and of course, the Beatles. "Physics of the impossible" is a book I came across at Borders which is, as stated on the book "a Scientific Exploration into the World of Phasers, Force Fields, Teleportation and Time Travel. "Call of Duty: my life before, during and after the band of brothers" by Buck Compton and "Hell Hawks: the untold story of the american fliers who savaged Hitler's Wehrmacht". Of course, as he reads these books, he will have to share every tidbit and tell me all about it because it is all so fascinating.

Father also received a very generous cheek from my parents and a couple of shirts from his father.

But the ultimate gift arrived finally during dinner. UPS delivering late, as usual. But at least it got here. 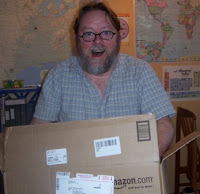 What could it be?

A blast from the past and all time favorite Yep, my hubby was quite thrilled to receive an original Lava Brand Lava Lamp. He is always talking about having a retro room when we finally get a bigger house with all 1950's and 60's stuff. Father had a quite enjoyable birthday and was pleased with all his gifts.