My Brother - The Baron

My Brother - The Baron

Yes, my brother is a Baron. On March 8th, He and his wife were installed as the Baron and Baroness of Ered Sul. They are in charge of a mini city in itself, which encompasses 4 counties in . He is also a Bard and writes and performs songs to entertain the masses. Plus, he does all the sword fighting and battles. 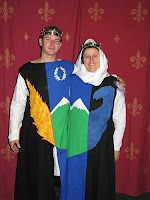 The Baron and Baroness

His Excellency has been a member of the Society for Creative Anachronisms (SCA) for the past twenty years or so.

My parents, who live in , attended the Investiture ceremony, given ceremonial garb to wear and presented to the court.