New York vacation: Oct 4 Day One - On our way


Thursday we took off for . I wasn’t able to get a non stop flight from so we are going through , then on to . We will be arriving in at 11:30 p.m. their time. When we got up, all we had to do was finish packing up essentials, my laptop, do the dishes, sweep the floor, last minute litter box clean out and throw out the thrash. At least that is what was on my list of things to do before we left at 12:00 p.m. for a 2:55 p.m. flight.

When father got up, he had a different list of things to accomplish – he needed to call and make arrangements for a circuit board to be printed up, email it to them, then call his AES associates. I asked him to finish three things before any of that: get his shaving kit and whatever else needed and pick out ties to be packed, and get the cash. I had packed all clothes and other stuff the night before.

We are packed and ready to hit the “hurry up and wait twilight zone.” We leave at 12:00 p.m. and turn around 5 minutes later when I remember to ask if father put the cash in his wallet.

We get to the airport and park in the economy lot and hop on the airport bus for a ride to the United Terminal. We check in at the curbside kiosk and get the test of “when is your son’s birthday.” We passed, but for some reason, I am on the special “cap” list (whatever that is) and he is restricted from printing my boarding pass. We have to check in at the counter. Guard leads us over to the front of the United check in line and hands us off to the counter person. She has no idea what the problem is and issues all boarding passes. I think I messed them up because went on United’s website the night before and tried to do their Easy online check in. However, since they didn’t have James birth date, it wouldn’t work, so canceled out of it. It must have put up a red flag.

On to security…we strip off shoes, take the laptop out of the bag, pull off my glasses, empty pockets of cell phone, change and associated other stuff, and put all, plus James cowboy hat into the gray plastic bins and slide them through the x-ray machine. Pick up all on the other end and proceed to our gate. Since they won’t be serving lunch on this leg of the flight, we grab chicken melt sandwiches and French fries. Of course, the French fries were the wrong kind of fries (but mom: they have skin - ewww) so James decided not to eat.

Three gentlemen from and a lady (their interpreter) sit down next to us and are very taken with James in his cowboy hat. They clamor for a picture of James, which I felt very strange about. I generally don’t let complete strangers take a picture of James. However, the interpreter said one of the men had a boy James age, missed him and his son would be delighted to have a picture of him with the American boy. I let them take the picture and the interpreter apologizes for her friend’s bad behavior. We get up to go back to the gate when one guy says something, takes off his lapel pin and hands it to James. The interpreter said “he wishes you to have this.” It is a silver pin with and raised relief of a cowboy on a horse throwing a lasso. 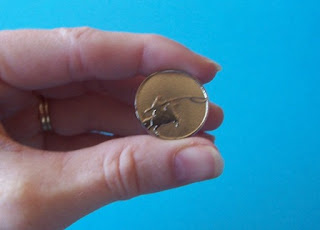 He seemed sincere and it didn’t look like an expensive piece (at least I hope it isn’t), so we accepted it.

We boarded the plane for our hop to and settled in for the two hour flight. I started reading “” by Dale Brown, Father read his AES magazine and James watched a DVD on the laptop. Before we knew it, we were in and had a one hour layover.

This is a statue of Apollo 13 Astronaut Jack Swigert at the Denver Airport. We get James french fries and milk from McDonalds (they seem to have a chain in every airport now, except ….. Hmmm!) and waited for our connection. We were suppose to leave 6:06 time but the plane was delayed 30 minutes. No big deal….right!

Well, as we are boarding the plane, the flight attendants are hurrying every one along as quickly as possible. They are telling every one to hustle because has a 12:00 curfew and if we don’t leave NOW, then we will be diverted. That’s right…La Guardia shuts down at 12:00 a.m. to do construction on the runways. According to another passenger this has been going on for the past 6 months.

We take off in a reasonable amount of time and the flight crew is ready to do the standard safety speech. What I hear is “everyone cease your conversations right now, close all reading material and pay attention to the monitors.” I laughed because it sounded like a very polite “shut up and pay attention.” The in flight movie was Evan the Almighty with Steve Carroll, which I had no problem ignoring because I can’t stand him. I set James up with the laptop and he watched one of his dvd’s. We had an uneventful flight and made it to La Guardia with 15 minutes to spare. We got our luggage pretty quickly and a helpful airport worker directed us to the cabs. 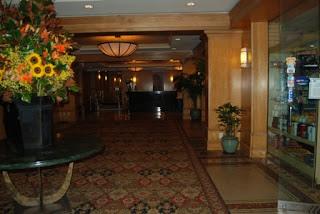 We arrived at the Radisson Martinique on Broadway in midtown around 12:30 a.m. and checked in.


The room was small and had double beds but I asked for a mini refrigerator which was delivered within 30 minutes of checking in! Why is having a refrigerator a plus? Because my guys could have their milk whenever they wanted it without paying $2.00 per glass.

The hotel is right at the border of town which was quite interesting. We decided to go out and buy some milk and goodies before going to bed. Mind you it is now 1:00 in the morning time and it felt strange taking James out that late at night. A bellhop told us about a bagel café and store about 2 or 3 blocks down and we were able to get some milk, water, fruit loops, cheerios, Pringles and Pepsi’s. Ah! The staples of life… ha!
We all fell into bed and tried to sleep…however there was a strange wooshing sound that occurred every few minutes. It was like the sound your toilet makes when leaking and it is filling itself back up again. Of course, it didn’t help that we were trying to sleep in a double bed, when we are used to a King. Every time Father or I moved, we were hitting elbows, knees, or other body parts and waking each other up. Reminder: always request a room with king size beds when traveling. So between those two things, plus the time difference, it was a while before we went to sleep.
at October 12, 2007