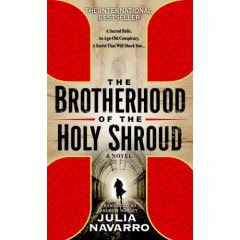 Brotherhood of the Holy Shroud

I was having difficulty coming up with an adequate description for this story so borrowed from Randonhouse.com

“Marco Valoni, chief of ’s Art Crimes Department, is convinced that a fire in the Cathedral of Turin that leaves a strangely mutilated, unidentifiable body on the scene was no accident. It is only the last in a long line of mishaps, going back over a hundred years, which have occurred in the church – which happens to be home to what millions of the faithful believe, is that authentic burial shroud of Jesus Christ.

Valoni and his crack team of specialists embark on an investigation that soon leads them into dangerous territory, territory controlled by some of the most powerful men in the world. Not only do they discover evidence of a secret Christian sect that traces its priests to the very disciples of Jesus himself, but also that the Knights Templar – supposedly destroyed forever when Philip the Fair of France watched their last Grand Master, Jacques de Molay, burn at the stake in 1314 – may not have disappeared at all, and may indeed be very much alive and active in the 21st century.

Julia Navarro skillfully weaves the Italians’ thrilling present-day investigation with the spine-tingling history of the Holy Shroud itself, and with a chilling tale of ancient rivals, equally devoted to the relic, and equally willing to sacrifice anything – perhaps even their immortal souls–to possess it.”

The story follows two timelines: The present of Marco Valoni and the past starting with the death of Jesus and the removal of the shroud. The two timelines are expertly woven together creating a very fascinating story.

What I found interesting and had never considered before was the explanation of why scientist can only carbon date the shroud back to the 1200’s. According to the story, the shroud was wrapped in another cloth. When the shroud was unwrapped at the end of the journey, it was discovered that an exact duplicate of the image had imprinted on the other cloth.

Excerpt: “Jacques de Molay was right: God had worked a miracle upon the cloth that had enfolded the Holy Shroud during the long perilous journey of Francois de Charney so many years ago – a cloth of soft linen, of the same texture and color as that in which Joseph of Arimathea had laid the body of the Christ to rest.”

It was an aha moment for me even though the book is a work of fiction.

The story is fascinating and well worth reading.
at October 24, 2007