We accomplished everything on our plan this week.

Day to Day Devotions. We completed the Fruits of the Spirit study and James knows Galatians 5:22,23 by heart now. Now I have to decide what we are going to
continue with. 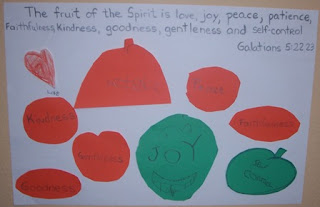 Lord, Teach me to Pray: Discovering the Kings Course of Action was all about dissecting Isaiah 36 and learning about worship, allegiance and submitting to God.

For example: When Father asked what 14 -1 equals, James would say 12 + 1 which is 13. Father told me he thought James was just being difficult, until I explained that it is a good thing. It means he is getting it and putting 2 + 2 together (no pun intended).

Language Arts: English and spelling completed very easily. Worked on putting together sentences and making new sentences out of words. For example the lesson gave him a 2 list of words such as leaves, fish, children, and fell, swam, sang, flew to name a few. He had to pick to two words and make a complete sentences. He came up with the following sentences:

1) The leaves fell from the trees in the fall.

2) The fish swam in the sea in the summertime.

4) The birds flew in the spring.

5) The horse galloped and the butterfly flew.

6) The children went to the beach for a swim.

How to Write a Story: The lesson was about “a slice of life” which is a like a snapshot that you write. James had to choose two characters and one setting from a bunch of word and write a story using the characters and setting picked. I cut up a list of characters, placed them upside down on the table and he chose two. Then did the same for the setting. The characters were a Monster and a Dad, the setting was a campground.

This is the story he came up with:

Episode 1: The Monster and the two black monsters

Once upon a time, there was a monster and a dad at a campground. They were playing hide and seek. Night came. The monster and the dad went to bed. The monster ran into the forest. Suddenly, he saw a dark dark cave. He went into the cave and saw two black monsters charging toward him. He ran out of the cave, past the campground and ran to the water where he splashed in and lived safely happily ever after. The end.

“Once upon a time, there was a monster and a dad at a campground. They were playing hide and seek.”.

It has a middle “Night came. The monster and the dad went to bed. The monster ran into the forest. Suddenly, he saw a dark dark cave. He went into the cave and saw two black monsters charging toward him.”

It has an end “He ran out of the cave, past the campground and ran to the water where he splashed in and lived safely happily ever after. The end.”

History: We read Chapter 19 A New Kind of King which is all about Richard the Lionhearted, his brother John, the Magna Carta and Robin Hood. James asked many questions throughout indicating to me he was listening intently. He thought Robin Hood was a bad guy because he was stealing and it didn’t matter to him who he was stealing from, it was bad. He was very concerned about the sheriff getting tied up and left at the edge of the forest.

Science: James and Father read all about Energy in Usborne’s Energy Forces and Motion and completed a project “making a loop” from the Sciencewiz electricity kit. James called me at work to tell me all about energy and “that if we didn’t have energy we wouldn’t have power.”

F.I.A.R: We read Amber on the Mountain this week and learned all about friendship, mountain life, and learning how to read and write.