We celebrated father’s 48th birthday yesterday, plus went to the Audio Engineering Society’s first official meeting for the new Sacramento Section. For his major present, Father was excited to receive a Milwaukee Super Sawzall Reciprocating Saw with Rotating Handle. Do you think I have a few "honey do" projects for him to do in the foreseeable future? James gave him a couple books about space and German planes, plus a neat musical card that played the chicken dance song. That song was stuck in father's head for the rest of the day and I heard him humming it quite a few times!
Father is the Vice Chair for the group, so we arranged for James to stay with J and J so I could go. James was all excited about being “kid sitted” by J and doing work for him. Just as we were about to leave, he climbed onto the tractor ready to work. 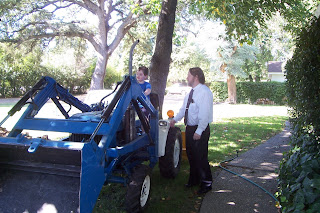 While we were at the meeting, he helped J plow the garden area and move some dirt. J said within a couple minutes of sitting down on the tractor, James had all the controls figured out.... that's my boy!

The event was held at the Pyramid Alehouse on in downtown . They had about 25 people show up, including the section chair for the San Francisco Section, Jim McTigue and his wife.
There was a buffet full of thai chicken skewers, mini pizzas, artichoke dip, salmon blt, chicken melt, and prime rib and pepper sandwiches, plus a fruit tray. 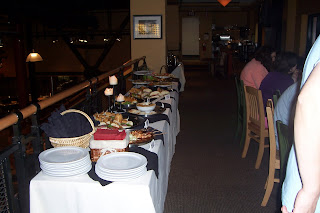 And this watermelon cut in the shape of a flower: 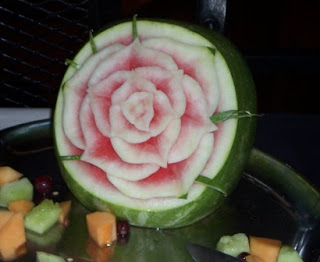 After eating, some of the guys did a jam session. Amazingly, none of the guys had ever played together before and they were able to meld together quite smoothly.
They all own studios around the Sacramento Area.

After that the officers and committee members were introduced 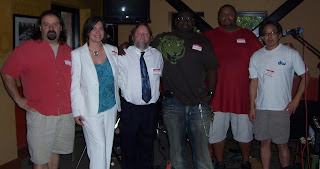 From left to right, Philip (committee), Janene (secretary/Treasurer), Father (Vice chair), Aman (committee), Kevin (Chair) and Eric (Organizer). Eric has been working at putting together the Sacramento AES for years and is finally seeing his baby come to fruition. 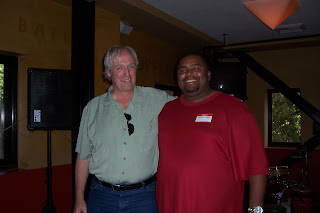 
I was the only one who brought a camera, so made sure to take lots of pictures and promised to share them with Janene, so when they put together their website, they will have some pictures. Everyone is excited about the new section and what they hope to accomplish. The Audio Engineering Society has been around for many years, has sections throughout the world and is entirely about audio technology. This group is all about the sound and that is where father's heart lies. In his words "it is all about the tone." I meet a few people last night who think like father, so I believe he will enjoy this group very much.

We picked up James about 9:00 and found that he had a wonderful time with J and J and wants to do it again real soon! J appreciated my little guys enthusiasm about working with him. Although, I did have one very tired little boy by the time we got home and he went right to sleep. So did I as a matter of fact.
at August 26, 2007