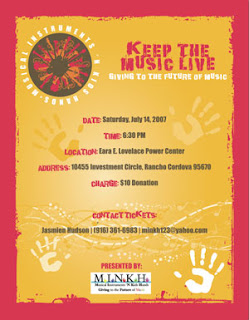 Last night we went to a fund raiser for M.I.N.K.H. Musical Instruments ‘N Kids Hands given by Flip Kirby, who is a friend of Father. Flip also happens to have toured with Bobbie Brown in the past. M.I.N.K.H. is a program Flip organized that donates new musical instruments to underprivileged kids.

Musical Instruments ‘N Kids’ Hands wants to promote community involvement by identifying aspiring youth ages 8 to 17 that are unable to afford an instrument. Through greater community awareness, M.I.N.K.H. aims to build partnerships with local sponsors and organizations to produce funding for the M.I.N.K.H. Instrument Give-Away Campaign. Their goal is to provide instruments to 5,000 underprivileged kids nationwide to cultivate a passion for and fulfill their music aspiration.
A few of our friends played in the band as backup for the kids who played drums, piano, sang, dance and one little girl even played the trumpet. Flip’s 8 year old son played the drums and he was simply amazing. All the kids were amazing. 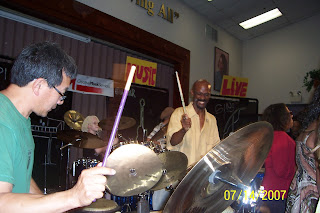 Petri Hawkins Byrd (Judge Judy’s Bailiff) emceed the event and was amusing, entertaining and kept things rolling smoothly. He did an amusing Jazz/bluesy rendition of the Flintstones song while raffle tickets where being sold. James thought he sounded like one of the actors from The Country Bears.

They raffled off several new musical instruments (along with lessons) including the grand prize of a complete drum set. There was a silent auction and we bid on a Ella Fitzgerald and Duke Ellington pictures.

If anyone would like to donate equipment, funds or time, or know any underprivileged kids who would benefit from this program, let us know and we will put you in touch with Flip.