James recently wrote two short stories about “Bob the Builder” and wanted to send it to the writers of the show.

The first one he wrote so it ended up being much shorter than what he originally intended. He told me this wonderful long story and then when we told him to write it down, lost half of it because he can’t think and write at the same time. Father has the same problem. I end up taking lots of dictation for business letters, etc. but that is another story.

The story ended up as this:

"Bob the builder and the fast steam train:

It was a Halloween night and I was helping out with Bob and the can do crew. Build a new train station. Just then a fast train went by. The End.”


The next one I wrote down as he dictated the story to me. He does quite well with telling a story and pausing for me to write stuff down. He tells me long stories everyday and then says "did you get that". Ha! Then he repeats it slowly for me to write down. Anyhow, the second story was a combination of several bob the builder episodes

“Bob the Builder, the snake and the Giant Spider!

One Halloween night I was returning home to the yard. Bob the builder, Wendy and the can do crew were waiting for me. I had just rebuilt the wooden railroad bridge. Just then a giant spider arrived. I was so surprised I ran back to the yard and told everyone. Just then Packer came by. He caught the giant spider, packed it up, and took it home to the Wild West. Then a giant snake came along. Jackaroo came along just in time. He swung it around and around and threw it into the Wild West with the giant spider.

He wanted to send it to Hit Entertainment but they don’t accept stories ideas if you don’t have an agent. So, I found the address for the creator of “Bob” and we sent him copies of the stories, plus a letter.

James said “I would like to make a suggestion for two episode of Bob the Builder. Enclosed are two stories I made up. I would appreciate your thinking about making a Halloween show. I love Bob the Builder. Thank you. James (7 years old)

I wrote a nice cover letter and sent them off. We received this yesterday. 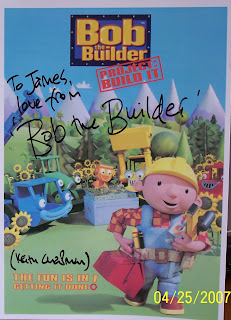 and a very nice letter from "Bob" that said

Thank you for your letter and your stories. I think you are going to be a great writer when you grow up. Or maybe a builder like me. A Halloween show would be a very good idea. Instead of a pumpkin, perhaps we could use Spud instead. Bye for now.

James was quite happy, Father was quite impressed and we will be framing the picture.
at April 25, 2007