The Forgotten Legion by Ben Kane 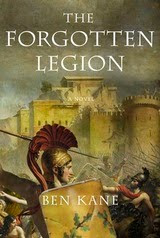 The Forgotten Legion
By
Ben Kane

Back Cover:  Romulus and Fabiola are twins, born into slavery, and then later sold; Romulus to gladiator school and Fabiola into prostitution, where she will catch the eye of one of the most powerful men in Rome.    Tarquinius is an Etruscan, a warrior, born enemy of Rome and trained in the forgotten arts of divination.  He has a long foretold destiny that will take him to the ends of the known world.   Brennus is a Gaul whose entire clan was killed in a battle against the Roman army.  After being sold as a slave he rises to become one of the most famous and feared gladiators of his day.    In a story that ranges from a Rome riven by corruption, violence and political enmities to the very edges of the empire, The Forgotten Legion is a novel of the most powerful empire in history told from the perspective of the lowest rungs of its society.

"The Forgotten Legion" is an excellent book, very well written, grabs your attention from the very beginning and doesn't let it go.  I'm usually don't read historical fiction because I find them dull, flat, and boring most of the time.     Ben Kane's epic novel surrounding  the lives of Romulus, Fabiola, Tarquinius and Brennus in ancient Rome changed my mind.    Do you think I like it just a little. :)  I normally don't get effusive over a book, but I really, really enjoyed this one.   Yes, what happens to the characters and following it from their perspective could make you cringe at times.  It was a brutal era.  Plus the  lives of the slaves were just a full of political strife and politics and backstabbing as the upper class.
I think what made the story so enjoyable is I just finished taking a course in Art from the Ancients up the 14th century.  Learning all about the art and architecture of the Roman era, then reading as the characters and their activities took place in the roman forum to pompey to the silk highway to the coliseum where the gladiator fights were held was just fascinating to me.   Made reading the story a much richer experience.    I highly recommend it.

Thank you to Trish and TLC book tours for inviting me to be a part of the tour and publisher St. Martin's Press with providing me a copy of the book and Ben Kane for writing such an incredible story.  The Forgotten Legion happens to be book one in a trilogy.  I look forward to reading the sequel The Silver Eagle which will be released March 16, 2010.   Kane also has a third book in the works and you can check it out at his website.
Please visit the other stops on the tour to see what the other participants thought.
*ftc notice:  book received free of charge and review is my totally unbiased opinion. I did not receive any compensation  in exchange for the review and  links to amazon are not affiliate links.
at February 16, 2010