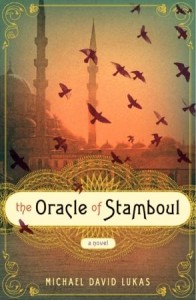 The Oracle of Stamboul


Front Flap synopsis:  Late in the summer of 1877, as Tsar Alexander II’s Royal Cavalry descends on the defenseless Ottoman outpost of Constanta, a flock of purple and white hoopoes suddenly appears over the town, and Eleonora Cohen is ushered into the world by a mysterious pair of Tartar midwives who arrive just minutes before her birth. “They had read the signs, they said: a sea of horses, a conference of birds, the north star in alignment with the moon. It was a prophecy that their last king had given on his deathwatch.” But joy is mixed with tragedy, for Eleonora’s mother dies soon after the birth.

Raised by her doting father Yakob, a carpet merchant, and her stern, resentful stepmother, Ruxandra, Eleonora’s early years are spent daydreaming and doing housework and avoiding the wrath of her stepmother—until the moment she teaches herself to read, and her father recognizes that she is an extraordinarily gifted child, a prodigy.

When Yakob sets off by boat for Stamboul on business, eight-year old Eleonora, unable to bear the separation, stows away in one of his trunks. On the shores of the Bosporus, in the house of her father’s business partner Moncef Bey, a new life awaits. Books, backgammon, beautiful dresses and shoes, markets swarming with color and life, the imperial capital overflows with elegance and mystery. For in the narrow streets of Stamboul—a city at the crossroads of the world—intrigue and gossip are currency, and people are not always what they seem. Eleanor’s tutor, an American minister and educator, may be a spy. The kindly though elusive Moncef Bey has a past history of secret societies and political maneuvering. And what to make of the eccentric though charming Sultan Abdulhamid II himself, beleaguered by friend and foe alike as his unwieldy, multi-ethnic Empire crumbles?"

The Oracle of Stamboul is one of those books that pulls you in from the beginning, intriguing enough to keep you reading, wandering what is going to happen. The hoopoes are quite significant and lend  a mystical aspect to the story as they follow Eleanora everywhere she goes. The story revolves around Eleanora.  She is one smart cookie. What her father considers a savant. However because they are Jewish, her stepmother doesn't want her drawing attention to the family and does everything she can to curb the young girl's thirst for knowledge. When she breaks Ruxandra's rule about revealing how smart she is, she is permitted to read only book a month for pleasure.  What was interesting is what she learned from the books.  She took what she read and applied it to her everyday life in how she came up with answers when questioned.  She saw correlations where others didn't or couldn't.  I'm still wondering if the seven volume set of books called The Hourglass exists. If I does, I'd like to read them.  :)   When she finds out her father isleaving for a month, she decides to stow away because she doesn't want to be without her father.   Her life takes an interesting turn when she arrives in Stamboul and draws the interest of the Sultan.

Michael David Lukas did an excellent job and there was a warmth to the story to stays with you after you've finished reading it.   He really draws you into the lives of Eleanora and the people surrounding her.  At times I felt sorry for Eleanora and at times thought she was way too mature for any normal eight year old.  I'm still mulling over the ending.  Guess it is the mother in me coming out.  But I can't see it ending any other way.   The Oracle of Stamboul is an excellent historical fiction novel with a young heroine who is wise beyond her years.  I highly recommend it.

Thank you to Trish for asking me to be a part of the Tour, Harper Collins for providing me with a courtesy copy and Michael David Lukas for writing such an intriguing, original story.
For more information on Michael, check out his website.


More thoughts about the book:

For more information on everyone on the tour, check out this link.
at February 23, 2011