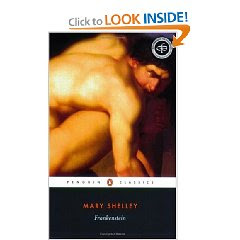 
Back Cover: "Obsessed with creating life itself, Victor Frankenstein plunders grave yards for the material to fashion a new being, which he shocks into life with electricity. But his botched creature, rejected by Frankenstein and denied human companionship, sets out to destroy his maker and all that he holds dear. Mary Shelley's chilling Gothic tale was conceived when she was only eighteen, living with her love Percy Shelley near Bryon's villa on Lake Geneva. It would become the world's most famous work of horror fiction, and remains a devastating exploration of the limits of human creativity."

For Heather's of Age 30's Dueling Monster's Read-A-Long I decided to read Frankenstein since I had never read it before. Frankenstein was quite interesting given that it was written back in the 1800's by an 18 year old girl. It was slow reading simply because of the writing style back then. I was surprised by the story because I some preconceived ideas about it from various films I had seen over the years and those were shot all to heck.

The story starts with an Adventurer Robert Wallen, trying to reach the North Pole. He tells the story in letters to his sister, Elizabeth. Out in the middle of the frozen ice lands, they meet up with Dr. Frankenstein who is chasing the monster. Frankenstein takes over the narrative at this point, telling his story and how he came to be there.


He had created a monster. Upon creating this monster and shocking it to life, he became instantly disgusted with it and himself and abandoned it.

"The different accidents of life are not so changeable as the feelings of human nature. I had worked hard for nearly two years, for the sole purpose of infusing life into an inanimate body. For this I had deprived myself of rest and health. I had desired it with an ardour that far exceeded moderation; but now that I had finished, the beauty of the dream vanished, and breathless horror and disgust filled my heart. Unable to endure the aspect of the being I had created, I rushed out of the room, and continued a long time traversing my bedchamber, unable to compose my mind to sleep....

I started from my sleep with horror; a cold dew covered my forehead, my teeth chattered, and every limb became convulsed: when, by the dim and yellow light of the moon, as it forced it way through the window shutters, I beheld the wretch - the miserable monster whom I had created. He held up the curtain of the bed; and his eyes, if eyes they may be called, were fixed on me. His jaws opened and he muttered some inarticulate sounds, while a grin wrinkled his cheeks. He might have spoken, but I did not hear; one hand was stretched out, seemingly to detain me, but I escaped and rushed downstairs." pg 58 -59

He leaves the house for a couple days and when he returns is overjoyed that the monster has left. The monster disappears for a period of time only to resurface angry with Frankenstein and kills his brother. Frankenstein knows the monster is responsible, however he is very depressed and travels up into the Alps to escape and sooth his weary spirit. The monster finds him and approaches and asks him to listen and help him. Seems the monster has managed to educate himself quite well.

"Be calm! I entreat you to hear me, before you give vent to your hatred on my devoted head. Have I not suffered enough, that you seek to increase my misery? Life, although it may only be an accumulation of anguish, is dear to me, and I will defend it. Remember, thou hast made me more powerful that thyself; my height is superior to thine, my joints more supple. But I will not be tempted to set myself in opposition to thee. I am thy creature, and I will be even mild and docile to my natural lord and king, if thou wilt also perform thy part, of which thou owest me. Oh, Frankenstein, be not equitable to every other and trample upon me alone, to whom thy justice, and even thy clemency and affection is most due. Remember, that I am thy creature; I ought to be thy Adam, but I am rather the fallen angel, whom thou drivest from joy for no misdeed. Everywhere I see bliss, from which I alone am irrevocably excluded. I was benevolent and good; misery made me a friend. Make me happy and I shall again be virtuous." pg 102-103

Seems the monster has educated himself living in a storage shed by a French family's house and spying on them. He managed to get a hold of three books and learned to read. The three books: Milton's Paradise Lost, Plutarch's Parallel lives and Johann von Goeth's Sorrows of Werter. The monster wants Frankenstein to make him a woman, a mate who will keep him company and he promises to disappear forever. After some thought, Frankenstein decides to so. He disappears to a tiny island and in the middle of making the monster's mate, is so overcome with disgust, destroys the mate halfway through. The Monster, who had been keeping tabs on him, kills his best friend, Cherval and Frankenstein is put in jail for the murder. When he is acquitted, he returns home to his father and his lady love who is still waiting for him.

Even though the Monster told him he would be there on his wedding night and kill him and despite the fact the good Doctor tells his lady love he has a terrible secret, but can't reveal it to her until they are married, he and Elizabeth get married. Frankenstein sends his new wife off to bed, while he paces the floor in the library, overcome with worry about the monster.

"She left me, and I continued some time walking up and down the passages of the house, and inspecting every corner that might afford a retreat to my adversary. But I discovered no trace of him, and was beginning to conjecture that some fortunate chance had intervened to prevent the execution of his menaces; when suddenly I heard a shrill and dreadful scream. It had come from the room into which Elizabeth had retired. As I heard it, the whole truth rushed into my mind, my arms dropped, the motion of every muscle and fibre was suspended; I could feel the blood trickling in my veins, and tingling in the extremities of my limbs. This state lasted but for an instant; the scream was repeated and I rushed into the room." pg 199

Yes, the monster killed Elizabeth and the chase is on. Dr. Frankenstein chases the monster until we get to the point where the doctor meets up with Robert Walden. He is in ill health and ends up dying. Robert discovers the Monster in the cabin with Dr. Frankenstein, saying goodbye to his creator. After a long and dramatic discourse over his body, jumps out the window and disappears into the night.

"But soon,' he cried, with sad and solemn enthusiasm, 'I shall die, and what I now feel be no longer felt. Soon these burning miseries will be extinct. I shall ascend my funeral pile triumphantly, and exult in the agony of the torturing flames. The last of that conflagration will fade away, my ashes will be swept into the sea by the winds. My spirit will sleep in peace; or if it thinks, it will not surely think thus. Farewell.' pg 225


Whoops - Folks are asking "Did I like the book?: Forgot to say didn't I. I found Frankenstein to be whiny and self centered. Many of his decisions made me mad. I couldn't believe Elizabeth's devotion. She seemed to ignore his faults, up to the point of marrying him even though he told he has this 'terrible' secret. The monster, well - in a way I felt sorry for it. Even though I found fault with the story, I couldn't put it down. I wanted to know what would happen next. Frankenstein is one of those books that you find fascinating simple because it is a train wreck waiting to happen. Yes, I liked it.

Head on over to Heather's and see what everyone else thought.
at October 30, 2009