You ready for one last giveaway - Here it is! 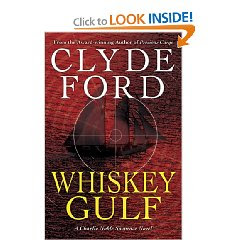 
Front Flap: After a sailboat drifts into a "live-fire" naval exercise area known as Whiskey Gulf, it's never heard from again. Maritime private investigator Charlie Noble is asked to discover what happened to the couple aboard. But he's stonewalled by the American and Canadian military. Then he learns that a Middle Eastern agent has been dispatched to find the couple as well. An agent with an old score to settle from his days as a Coast Guard intelligence officer.

Ultimately, Noble and his partner, Native American salvage diver Raven, head north along the Inside Passage where a hidden cove harbors answers about what really happened in Whiskey Gulf. But in order to return with the truth they must first survive a vicious attack and escape the clutches of a deadly whirlpool. Set in the stunning wilderness of the pacific Northwest, Whiskey Gulf is a story about unlocking secrets from the past that some people would rather keep concealed./blockquote>

Whiskey Gulf by Clyde Ford is third is a series of suspense books about Charlie Noble. I haven't read the first two year, but this book stands alone. It is well written and very interesting.

Charlie is asked by the members of the Kulshan Yacht Club to search for missing members William and Rebecca Kinsley. They and their boat went missing while sailing around Canada. They drifted into Whiskey Gulf, radioed they were having engine trouble, then completely disappeared. Charlie discovers they were in witsec and a terrorist is after them. The same man who once was Charlie's friend, until he killed his brother. Charlie and his partner, Raven are asked by the National Marine Intelligence agency to go on a ghost mission and track down the killer before he kills the couple. Whiskey Gulf is a techno thriller full of action. Ford writes along the lines of Dale Brown or Tom Clancy providing technical information about boats, torpedoes and military, but not as long. Makes for an interesting read. If you like techno thrillers, like me, be sure to get it. I highly recommend it.

I'll have to go back and read his other two books in the Charlie Nobel series: Red Herring and Precious Cargo. Thank you to The Perseus Books Group and Clyde Ford for providing me with a copy of Whiskey Gulf.

Tina of BookShipper:
"But what I loved most about this book (other than the non-stop suspense - which there is a abundance of) is the dialogue. Everyone in this storyline has witty and fun dialogue - and I would even venture to use the word "sarcasm" in some places - which I LOVE in any storyline."

M.Schlecht of Mystery Scene:
"Although sometimes a little heavy on the nautical jargon, Ford paints a realistic portrait of maritime life (he writes aboard a 30-foot trawler in Bellingham, WA after all), and readers will feel like they are boating right along with Noble as he investigates the case."

Bonus Giveaway
That's right - I want to share - it is too good to keep to myself. I'm giving it away to some lucky person. To enter this contest, please leave me a comment along with your name and email address. The contest will remain open a bit longer and end at Midnight, Saturday September 19th. Winners will be picked using Random.org and notified via email. Contest open to U.S. residents only.