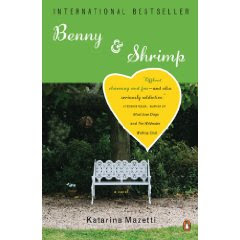 Front Flap: "It started in a cemetary, where they begrudgingly share a bench. "Shrimp," the childless young widow and librarian with a sharp intellect and a home so tidy that her jam jars are in alphabetical order, meets Benny, the gentle, overworked milk farmer who fears becoming the village's Old Bachelor. Both driven by an enormous longing and loudly ticking biological clocks, they can't escape the powerful attraction between them.

But how will she learn to accept that he falls asleep at the opera and has a house full of his mother's cross stitch? And how could he ever feel at home in her minimalist apartment, bare as the dentist's waiting room?"

"Benny and Shrimp" is a quirky love story between two middle age people who are as set in their ways as anyone could possibly be. The story is written in first person from each of the characters perspective. Desiree aka Shrimp notices Benny one day sitting on the bench in front of her late husband Orjan's grave. While Orjan's gravesite is completely barren with no plants to be seen anywhere, the gravesite next to her is covered with plants of all sorts.

"Next to Orjan's stone there's a really tasteless gravestone, an absolute monstrosity. White marble with swirly gold lettering, angels, roses, birds, words on garlands of ribbon, even a salutary little skull and scythe. The grave itself is as covered with plants as a garden center. On the headstone are a man's name and a woman's name with similiar dates of birth, so it must be a child honoring his father and mother in that overlavish way.

A few weeks ago I saw the bereaved by the monstrosity for the first time. He was a man of about my age, in a loud, quilted jack and a padded cap with earflaps. Its peak went up at the front, American style and had a logo saying Forest Owners Alliance. He was eagerly raking and digging his little plot." pg 4

Benny notices her but doesn't like her at first. Her appearance annoys him

"I like a woman's appearance to say: look at me, see what I've got to offer! It makes me feel sort of flattered. She should have shiny lipstick and little shoes with straps and pointed toes, and her breasts boosted up under your nose. It doesn't matter if her lipstick's a bit smudged, or her dress pulls tight over her spare tire, or there's hardly room for all her huge artificial pearls--not everybody can have good taste; it's making the effort that counts. I always fall a little bit in love when I see a woman who's not all that young any more but who's invested half a day's work in getting noticed, especially is she's got long, false nails, hair permed to extinction, and teetering high heels. It makes me want to hold her and cuddle her and pay her compliments." pg 6

So, you are probably asking yourself - how on earth did these two manage to get together. She smiled at him one day and he smiled back and it changed everything. Finally a love story for those of us who aren't perfect. He isn't an alpha male and she isn't a femme fatale with legs up to there. They are two ordinary people, as different as night and day who try to make a go of it. Their story is interesting and humorous and well worth reading. A big Thank you to Caitlin of FSB Associates for providing me with a copy of the book. It is greatly appreciated.