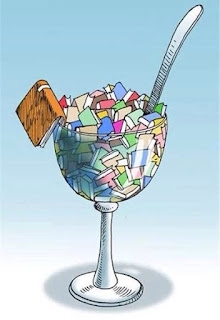 I finished Dragons of Dorcastle, the 1st book in the Pillars of Realty series by Jack Campbell.  There was a lot of talk about dragons but nary a one to be seen until the next to last chapter and its presence was short lived.  The focus was on the two young main characters:  A young man raised as a Mage and taught to ignore all emotion and think of the rest of the world as an illusion, and people are shadows, nonexistent to his reality.  And a young woman, the youngest Master Mechanic, also taught the Mechanics were better than everyone else, including the Mages, and the commons beneath their notice.   Both their lives are on the line and they must work together, in secret, behind their Guilds backs.  Great premise but I unfortunately don’t like the characters enough to continue the series.

(Dragons, steampunk,  A to Z read by Title)

Happy Happy Joy Joy.  Dirty Deeds: an Urban Fantasy Collection, written by Faith Hunter, Devon Monk, Diana Pharaoh Francis, and R.J. Blain was just released.  Hunter and Monk are two of my favorite authors and I enjoyed the continuation of two storylines.  Hunter’s Yellowrock series with Bound into Darkness showcasing Eli and Liz, and their budding romance while in the midst of a dangerous job, and The Ties that Bind, featuring Bedilia (Molly’s mother) and the Vampire Master of the City of Asheville, Lincoln Shaddock. Plus Monk’s Ordinary series with Sealed with a Tryst in which the every day chaos of policing the town is preventing Delaney from leaving for a vacation with Ryder.  Followed by At Death’s Door highlighting Than, the God of Death which is amusing.  The collection was also a lovely introduction to Francis and Blain whom I’ve never read before.  At 643 pages, the stories kept me entertained.  (Fantasy)

Taking another Nora Robert’s break with the Gallaghers of Ardmore trilogy set in Ireland: Jewels of the Sun, Tears of the Moon, and Heart of the Sea.   (Fantasy Romance)

Still sipping from Harry Potter, and When Christ and his Saints Slept, and craft books and continuing to listen to Christopher Paolini’s To Sleep in a Sea of Stars on audio book while going to and fro in the car.

I didn’t know what to expect about the Count of Monte Cristo. All I knew was that it was about a man in prison and it was a classic.  While putting together the 52 Books post, enjoyed learning about the story and now I’m even more eager to begin reading it. Plus watching and comparing the two different movies.